Hasmukh Season 2 Updates: There are various contents available on Netflix. Following the trends, many Indian web series have made the audience drive crazy. To date, we have many series falling in the genre of crime, thriller, action, comedy, and even mystery. During the lockdown when everything was going online, the Indian audience also shifted to OTT platforms. Before this pandemic, people were aware of the series and movies that were being released online. But the fact is, it gained more popularity and attention in the lockdown period. Besides this, there is one series, the title of which will make you smile, Hasmukh. We can expect season 2, keeping in mind the positive and warm responses this series received from the people. If you are willing to know about Hasmukh season 2, then we have everything you need to know about it.

In the coming time, we can expect the makers to drop any official confirmation or announcement regarding season 2. So for now, all we can do is to expect Hasmukh season 2 to release in 2021. However, the exact month and the date are still to be explored. At the moment, we cannot promise you the second season of the series but we are pretty much sure that it could make its way.
On 17th April 2020, it was premiered on Netflix. With a total of 10 episodes, Hasmukh season 1 had a satisfactory viewership level. The trailer of which was dropped on 6 April 2020 on YouTube by Netflix.

The story of the series is different and the cast of Hasmukh makes it super-duper intense. The central character, Hasmukh is played by Vir Das whereas one of the prominent characters, Gulati is acted by Manoj Pahwa. On the other hand, Ranvir Shorey, Ravi Kishan, Amrita Bagchi, and Raza Murad have joined the star cast as Jimmy, Mr. Sinha, Promila, and Jameel Indori, respectively. Further, Deeksha Sonalkar and Suhail Nayyar are in the roles of Rhea and KK. The cast would hardly undergo any changes, and most probably, the entire star cast would reprise their roles in season 2 as well. 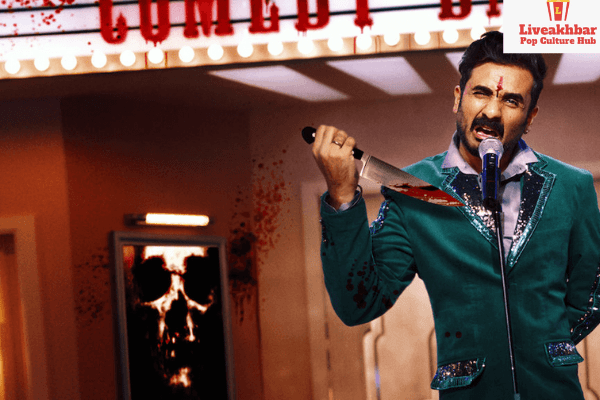 The story is about a comedian belonging to a small town. This is the description of the protagonist, Hasmukh. He wants to showcase his talent and become a comedian. Coming from a village, Saharanpur, he dreams to establish himself as one of the great comedians around the world. He works under Gulati, a famous comedian. The lead character always wanted his boss to give him a chance to show his talent as a standup comedian but Gulati always refused. The twist is, Hasmukh’s journey is not smooth going and lacks comic timing. He travels to Mumbai along with Jimmy, after which he receives an offer of 15 lacs per episode. His only motive is to win the contest, Comedy Badshaho. Meanwhile, he realizes that his inspiration comes only when he commits a murder. This makes her smoke to create comedy and crack jokes while giving a stage performance. He gradually turns into a serial killer. Investigating the death cases and continuous murders, the police are looking for the culprit and are doing every possible effort to catch the serial killer. In reality, he has two lives. Firstly, the world sees him as a comedian while on the other hand, he is a serial killer. The ending of the series shows KK as the winner of the contest.
If Hasmukh season 2 will be releasing, then the plot would pick up from this instance. We will probably get to know more about his journey.

Hasmukh is an Indian TV series that is considered to be a dark comedy, crime show. Nikhil Gonsalves is the director and Vir Das is one of the co-writer of this series. The team of producers is Madhu Bhojwani, Monisha Advani, Sameer Nair, Vir Das, and Nikkhil Advani. It has 10 episodes that were released at the same time on Netflix. 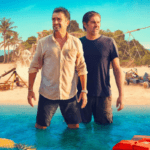 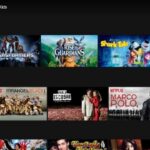