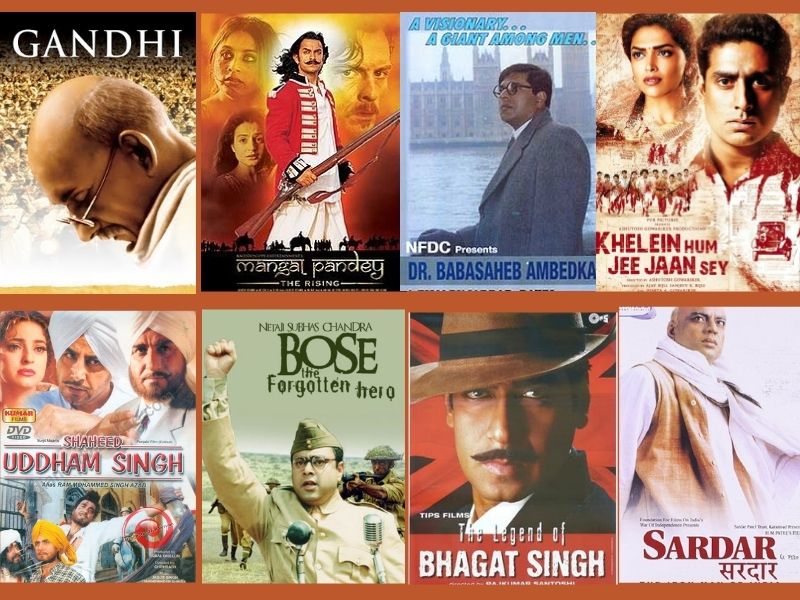 India got its freedom in the year 1947. The fight and struggle for independence will forever be close to every Indian’s heart. Thousands of people shed their blood like water and sacrificed their lives to find and achieve freedom from the cruel British rule. Nothing comes free so as our freedom which was received after fighting a battle. The battle brought pressure sorrow and sacrifice to the people but the freedom fighters accepted all of the hardships and fought for India’s freedom which resulted in India into a colonial Nation and secured full autonomy from the British.
To remember our great freedom fighters, the cinema industry has made many great movies. From Gandhi to Bhagat Singh we are blessed with such enormous movies in the name of our extraordinary freedom fighters. Following are the best biopic films of freedom fighters.

The film Gandhi is a biopic on the father of our nation and the father of nonviolence, Mohan Das Karamchand Gandhi. It was released in 1982. ‘Gandhi’ film has got 11 nominations in the Oscar, out of which it won 8 Oscar Awards. There is a big irony with this film that it is a biopic film made on the father of the Indian nation but is made by a British director and producer Richard Attenborough. The screenplay is written by John Briley and won an Oscar for it.
The budget of the film was $22 million which resulted in the box office with the amount of $127.8 million.
The casting of Gandhi Ji’s character is performed by a British actor named Ben Kingsley. The film revolves around the life of Mahatma Gandhi depicting his role in making himself, from Gandhi to Mahatma Gandhi. The film shows, How a Lawyer Mohandas Karamchand feels the discrimination and visits his country which was at the hands of Britishers when the Indians wanted freedom from the cruelty done to them. Gandhi chose non-violence to fight and brought freedom to India.
This film is considered the best biopic film of a freedom fighter by many of the ranking organizations.

The legend of Bhagat Singh.

The legend Bhagat Singh, an inspiration to every fighter soul for freedom. The film ‘ The Legend of Bhagat Singh’ was released in 2002 and is directed by Rajkumar Joshi. This film is a biopic of the legendary Bhagat Singh who was born in British India and found many atrocities during his childhood. He was one of the most fearless freedom fighters who gave his life proudly in the name of the country’s sovereignty and independence. The young revolutionary embarked on fire with the slogan ‘ Inquilaab Zindabaad’. The movie stars Ajay Devgan as Bhagat Singh, Sushant Singh as Sukhdev, Amrita Rao as Mannewali. The film attaches lots of emotions for every Indian with the hanging of the hero Bhagat Singh. It also reminds us of the sacrifices, how our freedom fighters struggled to bring the freedom that we are enjoying today. This film holds the history of Bhagat Singh’s life and is one of the Masterpiece biopic films of freedom fighters.

Mangal Pandey, who is not familiar with this name and character. The courageous man was the first man to spark a revolt against the Britishers, the revolt is known as India’s first war of Independence. The film ‘Mangal Pandey: The Rising’ was released in 2005 is directed by Ketan Mehta and starred Amir Khan, Toby Stephen, and Rani Mukherjee. The film holds the incident when Mangal Pandey was sent to Afghanistan for a war where he became friends with William Gordon. But when the British East India Company introduced the rifle which included cartilages made of cow’s and pig’s fat, he rises in revolt. Internationally the film is known as ‘The Rising: Ballad of Mangal Pandey. The film includes some fictional parts also yet it is a biopic of Mangal Pandey and revolves around his life’s struggle in the race for freedom to India. It is a great biopic of a freedom fighter to remind him forever.

Subhash Chandra Bose was not only a great freedom fighter but also is an inspiration to millions of Indians who were struggling against injustice. His idea was different from that of Mahatma Gandhi’s ideology, he believed in violent actions to threaten the Britishers and fight for freedom. The film stars Sachin Khedekhar, Divya Dutta, and Ila Arun. The film ‘ Netaji Subhash Chandra Bose: The forgotten hero’ can be considered as a great step to remind the forgotten hero who did sacrifice his life for the freedom of India. It was released in 2004 and is directed by Shyam Benegal. The film shows the history and past life of the freedom fighters and the story revolves around Netaji’s life, as the name depicts itself that the film is something about to put forth the Forgotten Hero.

Sardar Vallabhbhai Patel is one of the greatest of India’s freedom fighters. He was born in a wealthy family during British Rule in India. He had the idea of Indian indecency that was turning into violent tensions. After hearing Gandhiji’s speech and his ideology Sardar Patel changed his mind and joined Gandhi. The film stars immensely talented Paresh Raval who did a tremendous job at playing Sardar Ji’s role. The film was released in 1993 and directed by Ketan Mehta. It is a biographical drama film that revolves around the life of Sardar Patel and covers his struggles in the race of India’s Independence. The film is one of the best biopic films of freedom fighters.

Bhimrao Ambedkar, the greatest social reformer of India. His contributions to this nation are the reason for India being the best democratic country. The film put forth the excellent personality of the ‘Man of Era’. ‘Dr. Babasaheb is a biopic of Bhim Sahab that holds no exaggerated form of stories and brings out the real true heroism story. How Dr. Bhim Rao Ambedkar found the idea of inequality in society and fought against the society for their equal rights. The film is directed by Jabbar Patel and was released in the year 2000. The role of Mahatma Gandhi is portrayed by Mohan Gokhale and Ramabai Ambedkar’s character is portrayed by Sonal Kulkarni. This is one of a masterpiece in the biopic films of freedom fighters.