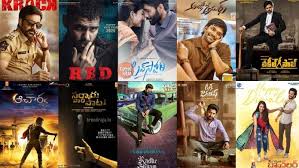 The year 2021 began on an awfully energetic note for the Telugu screenland. The reverberating triumph of Ravi’s Krack and Vijay’s Master at the box office bought much warmth in the value chain. There are a number of blockbusters that will hit the theater this year. The release date, genre, cast, and latest trailers of upcoming Telugu movies in 2021 can be explored in this section. Your ultimate destination to know all the details of the Telugu movies are here and schedule your plan accordingly to run into the cinema hall.

Here the confirmed list of upcoming Telugu Movies in 2021.

Akshara: Written and directed by Chinni Krishna and produced by Suresh Varma Alluri and Ahiteja Bellamkonda, a thriller, and commendatory on the education system of India. It is the story of a determined college teacher who deals with the shortcoming of the education system. It stars Nandita Swetha as a lead role followed by Madhunandan and Ajay Ghosh. Akshara. A crime thriller will release on February 26.

it is a sports drama that sheds the light on India’s national game Hockey. He played. Dennis Jeevan KanukolanuDirector and Viswa Prasad, Abhishek Agarwal, and Sundeep Krishan are the producers of the movie .  The movie is starring Sundeep Krishan in a lead role of an ace Hockey player. It also stars Murali Sharma, Roa Ramesh, Posani Krishna Murali, and Priyadarshi Pulikonda. A1 Express set it hit the screen on March 5th.

The director, writer, and a screen played by Ugandhar Muni and produced by Geetha Minsala, A: Ad Infinitum is an unimaginable medical thriller. The story revolved around a married man who goes in a search of knowing his past and identity. The story bridge from the year 1977 to 2019. What unfolds during the journey makes it an edge-of-the-seat thriller. It stars Nithin Prasanna and Preethi Asrani. It is due at the cinema on 5th March.

it is a comedy-drama and political satire. It tells the story of three friends who travel to Hyderabad for a king-size living but got trapped in some dangerous events. Anudeep K.V is the Director and Writer of the movie. Jathi Ratnalu and produced by Nag Ashwin. The film stars Naveen Poishetty, Priyadarshi Pulikonda, and Rahul Ramakrishnan in its lead role. It is set to be released on March 11th.

Directed by Kishore Reddy and produced by Ram Achanta and Gopichand Achanta, this action drama set in the rural backdrop of India. It stars Sharwanand and Priyanka Arul Mohan in lead roles. It is due at the cinema on 11th March.

it is a true blue animal film based on the true friendship between a human and an animal. Prabhu Solomon is the Writer and Director and Shantanu Moitra is the music composer of the movie. This movie will simultaneously be released in two languages i.e. in Hindi as Hathi mere Sathi and in Tamil as Kaadan. The film stars Rana Daggubati in an-ever-seen before avatar. It seems that he shares a special bond with the forest and animals within. Aranya also stars Zoya Hussain, Vishnu Vishal, and Shriya Pilgaonkar. It sets to open is a cinema on March 26th.

It is a sports drama film written and directed by Sampath Nandi. Gopichand Tamnnaah Bhatia and Digangana Suryavanshi are in its lead role. Seetimaarr will hit the theatre on April 2nd.

The Telugu remake of Bollywood movie Pink directed by Venu Siram and produced by Boney Kapoor and Dil Raju. In the remake, Pawan Kalyan steps into the shoes of Amitabh Bachan.  Vakeel Saab also stars, Ananya Nagalla, Prakash Raj and Anjali, Nivetha Thomas. It will hit the theatre on April 9th.

Mani Ratnam’s 1988 action movie Gharshana is the inspiration of the movie, which encircles sibling rivalry. Shiva Nirvana is the Director and Sahu Garapati and Harish Peddi are the producer of the film. The film stars Nani in the lead role, Aishwarya Rajesh and Ritu Verma. The movie is coming on 16th April in the theatre near you.

It’s an upcoming Telugu action drama film directed by Koratala Siva. Ram Charan and Niranjan Reddy are the producers. It will release under the Konidela Production Company and Matinee Banner. Chiranjeevi will be seen in the role of a communist revolution in the movie.  It will hit the theatre on May 13th.

It is an upcoming Telugu movie based on the novel named Vekkai written by Poomani. It is also an official remake of the Tamil hit Asuran (2019). The film was helmed by Srikanth Addala. The film features Venkatesh, Priyamani, Karthik, Rathnam, Prakash Raj, and Murali Sharma Raj in distinguished roles.  Naarappa will let out in cinemas on May 14th.

it is an upcoming romantic comedy film written and directed by Bhaskar and produced by Bunny Vas and Vasu Varma on GA2 Pictures. The movie features Akhil Akkineni, Pooja Hedge and, Eesha Rebba in notable roles. The film will set out on June 19th.

the film based on the life of an Indian Army Major Sandeep Unnikrishnan who martyr in the 2008 Mumbai attacks. This film is shot simultaneously in Telugu and Hindi. Sashi Kiran Tikka is the director of this biographical film. AdiviSesh who has also written the story plays the lead role while Sobhita Dhulpala and Revathi are other featuring actors. It will set out in cinemas on July 2nd.

it is an upcoming Indian romantic drama starring Prabhas and Pooja Hedge. Radha Krishna Kumar has written and directed this film. This film is going to be released in Tamil, Telugu Malayalam, and Hindi. The movie is coming on 30th July in the theatre near you.

this upcoming movie is a thriller action drama. Sukumar is the writer and director and Devi Sri Prasad is the composer of the movie. The film stars Allu Arjun and Rashmika Mandaana in prominent roles. Jagapati Babu, Prakash Raj, Sunil, Harish Uthaman and, Vennela Kishore play supporting roles in this movie. It is due in cinemas on August 13th.

Depending upon the status of the film relase date may subjected to change.

Also read: Best movies like The Kissing Booth on Netflix