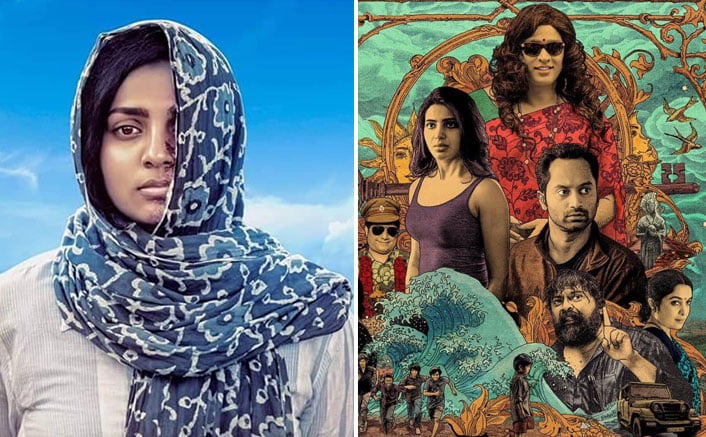 Uyare is a 2019 Malayalam language film that stars Tovino Thomas, Parvathy Thiruvothu, and Asif Ali in lead roles. Manu Ashokan is the director of the movie and Bobby-Sanjay wrote it. It is an inspirational story of Pallavi, who wants to be a pilot. She gets in a toxic relationship with Govind where she faces lots of possessiveness and toxicities. The movie says alot about mental and emotional abusing. Pallavi survives an acid attack and fights for justice to get back everything that has been snatched from her life. This movie is a must-watch for all, especially for every girl or woman.

Mallesham is an Indian Telugu biographical film, that is a fascinating biopic of Chintakandi Mallesham, a school dropout. Raj R is the director of the film. Chintakandi Mallesham sees a lot of difficulties that her mother and other members of the weaving community faces. Mallesham invents the weaving machine to process yarn for Pochampally saris. The movie portrays the real struggle of an ordinary person against poverty.

Oh! Baby is a 2019 comedy entertaining movie and Suresh Babu is the film producer. Nandini Reddy is the director of the film and it stars Naga Shaurya, Samantha Akkineni, Lakshmi, and Rajendra Prasad in the lead roles, and it is the remake of a Korean film Miss Granny. The movie is all about Savitri(Lakshmi), a widow who lives with her family. Savitri is a caring granny, and she loves and cares for her grandchildren. Her daughter-in-law doesn’t like it, and it creates a fuss at home. It leads to a tussle between her and her daughter-in-law. Savitri leaves the house due to all these disappointments, but then suddenly she returns as Samantha, a 24-year-old “baby.” It is an excitement to see how she transforms into a young baby.

Bheeshma is an Indian Telugu-language comedy action film that stars Nithiin and Rashmika Mandanna in lead roles. It is a 2020 film and Venky Kudumula directed it. The movie’s story revolves around Bheeshma, who is frustrated more about his single status than clearing his backlogs. Then he met Chaitra and fell in love with her. It is love at first sight for Bheeshma, and he tries hard to impress her. An unexpected turn comes into Bheeshma’s life when he is noticed by the founder of an organic farming company named Bheeshma(Anant Nag). The story is all about how they both are related and how Bheeshma(Nithiin) wins her love Chaitra’s heart.

Andhaghaaram ( Darkness) is an Indian Tamil-language supernatural thriller film that stars Kumar Natarajan, Arjun Das, and Vinoth Kishan in lead roles. V. Vignarajan wrote and directed it, and Priya Atlee is the movie producer. In this movie, you get to see three types of stories. The first story is of a blind person who has to transplant his kidney. The second story is of a man who is very depressed in his life, and the third story is of a doctor whom his patient shoots. Fortunately, that doctor doesn’t die, but his voice deteriorates forever. The movie tells how does the story of these three matches with each other. Andhaghaaram is an excellent horror psychological movie.

Super Deluxe is an Indian Tamil-language black crime comedy-drama film with elements of fantasy and science fiction. Thiagarajan Kumararaja is the writer, producer, and director of the film, and it stars Samantha Akkineni, Ramya Krishnan, Vijay Sethupathi, and Fahadh Faasil in lead roles. The film has four stories about various people who are stuck in difficult situations. It has four parts, one part of the story is of a father who has a son. The father returned home after a long time and that too as a woman. He has changed his sex. Another part of the story has a arrange marriage couple. The husband is a struggling actor, and the wife lives in the house despite being modern. His wife’s old lover comes to meet her in depression, and then due to some reasons, her lover dies.

Then the wife tells everything to his husband, and both of them now go out to hide the corpse. The third story is of a man who survived a tsunami. He worships a stone because he was saved by holding the same stone. Seeing his faith, many more people come to him to find solutions to their problems. The fourth story is about three unemployed friends, and they need money. Getting misleading by a politician, they take a supari to kill a person. It is just a trap of the politician to test these boys in which they get trapped.

Thottapan is a Malayalam film written by PS Rafeeque and Shanavas K Bavakkutty directed it. The movie is all about two friends Itthaque and Jonappan, who share an excellent friendship and stand by each other every time. They both are thieves, and while living their lives happily, Jonappan gets murdered. After this incident, Jonppan’s family and Itthaque remained shocked. Itthaque takes good care of Sara, who is Jonappan’s daughter. They both start searching for the murderer.

Forensic is an Indian Malayalam-language mystery crime thriller film It is a 2020 movie that stars Mamta Mohandas and Tovino Thomas in lead roles. Akhil Paul and Anas Khan wrote and directed it. This movie centers on the forensic department of the Kerala government. A medico-legal adviser named Dr. Samuel John Kattookkaran works under the forensic science lab of the Kerala Government. He is assigned work to assist Rithika Xavier IPS, a chief investigating officer, and they are set to investigate the serial murders of young girls in the town. Samuel and Rithhika are not comfortable working together, but they still try their best to find out the killer.

Kannum Kannum Kollaiyadithaal is an Indian Tamil-language film. The movie was written and directed by Design Periyasamy in 2020. The film stars Dulquer Salmaan, Niranjani Ahathian, Ritu Varma, and Rakshan in lead roles. This is a story of two talented people Siddharth (Dulquer Salmaan) and Kallis (Rakshan), who do petty crimes for a living and are so clever. Then they fall in love with Meera (Ritu Varma) and Shreya (Niranjani Ahathian). There is an epic twist on how they come to learn the truth about the women.

Psycho is a 2020 Indian Tamil-language film that stars Nithya Menen, Udhayanidhi Stalin, Aditi Rao Hydari, and Rajkumar Pitchumani. Mysskin wrote and directed it. Arun Mozhi Manickam is the producer of the movie. The film has a psycho serial killer who has killed 14 women so far. When he kidnaps Dagini, a blind music conductor named Gautam, who likes her, sets out with a former police officer Kamala Das to catch the killer.