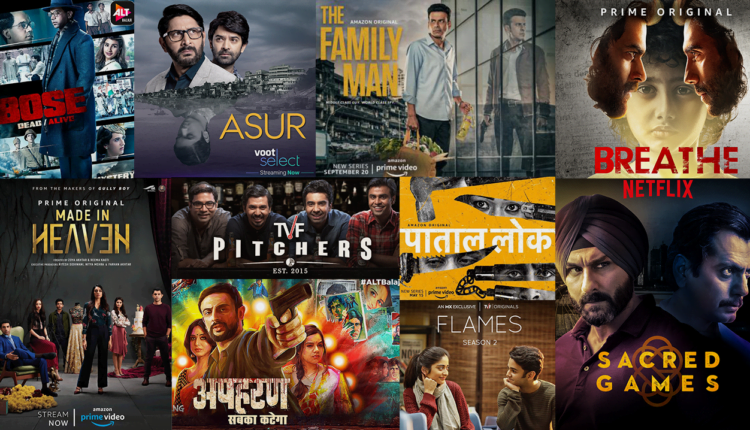 Web series are the series that have been scripted or non-scripted videos that consist of a number of episodes. The first web-series emerged in 1990, web series become more famous in the 2000s. web series programs are also known as “webisode”, the term webisode became very famous for sometime after that this term was stopped being used. Web series are generally released on the internet only and can be watched on various platforms such as Netflix, amazon prime, Zee5, VIU, mxplayer, and many more. Some of the web series can also be seen on television. There are various web series released till now and many of the web series become more successful and have been released on different platforms. So, without wasting a minute let’s get into the storyline of some of the most successful web series of 2020.

Special Ops is the Hindi-language web series that has been released on Hotstar Dinsey+ on 17th March 2020. Special Ops web series is full of action and thriller and is directed by Neeraj Pandey along with Shivam Nair starring Kay kay Menon, Karan Tacker, Gautami Kapoor. The story of the Special ops is about the research and analysis wing of Himmat Singh, he draws the same pattern that has been used in every terrorist attack and he was sure that there is a single person who was planning all these attacks. He decided to bring that person in front of the world. His task force teams were of five agents that have been living in different parts of the world and the mission of the team was just one that was to catch the mastermind who was behind all these attacks. Special Ops web series have become successful and was appreciated by the audience and has been rated 8.5/10. After the series got so much love and appreciation from the audience there has been news on the internet that Special Ops season 2 will be released only in March 2021.

Breathe: Into the Shadows

Breathe: into the Shadow are 12-episode web series that was released on 10th July 2020 on amazon prime video. The series contains an Indian crime drama thriller that has been directed by Mayak Sharma along with the producer Abundantia Entertainment. The web series have starred Abhishek Bachchan, Amit Sadh, and Nithya Menen. The story of the web series revolves around a psychiatrist Avinash and his wife Abha who was a chef. In its 12 episodes it shows that how a couple’s life gets ups and downs when they found that their daughter Siya has been missing or kidnapped when she visited her friend’s house to attend her friend’s birthday party and even police reached at the place immediately but even, they were also failed to track the kidnapper after several months the couple got the tasks from the kidnapper which provided them the hint that their daughter has been alive. The couple got the call from the kidnapper and told them if they want their daughter back, they have to perform a task in that they have to perform some incredible and terrifying murders. In the series, the kidnapper was Avinash himself as he was having split personality disorder the kidnapper was his ego J. Avinash was suffering from a split personality from his childhood because of his traumatic past. In the final episode of the show, Amit Shah who was a police officer comes to know about the personality disorder Avinash.

Asur web series was released 2nd March 2020, it is full of crime and thriller created by Gaurav Shukla, Shweta More, Vaibhav Shikdar along with the producer’s Ding entertainment and Viacom 18 studios starring Arshad Warsi, Barun Sobti, Anupriya Goenka, and Ridhi Dogra. The web series is completely based on True Detective. Asur web series was produced by Viacom 18 and was released on the Voot platform. The story of Asur revolves around the serial killer and the CBI officer.

The father of the serial killer thinks that his son has born on inauspicious mahurat according to Hindu astrology and thinks he is of no use and cannot do anything in his life. Killer’s father keeps on abusing him. He got frustrated because during his entire childhood he kept on listening to harsh words and he always gets rude behavior from his father which results that his son plans a conspiracy and kills his father. CBI officer (Arshad Warsi) was also present in Varanasi for pooja.

The pooja was conducted by the killer’s father, CBI officer himself witnesses the whole conspiracy of killing his father. After witnessing the conspiracy CBI officer decided to throw the killer’s son behind the bars, it can only be possible if he proves that the killer was not a juvenile (below 18 years) that can be proved through fake certificates and proofs. On the other hand, the killer’s son was knowing some of the magical powers with the help of that powers he gained the knowledge of Puranas and Vedas.

After several years, the same killer boy decided to trap the CBI officer and put him behind the bars. In order to do so, he again starts serial killing. He starts killing people on the basis of his beliefs about what is good and bad. As the killer had gained the knowledge of Puranas and Vedas with the help of his power, he only targets those people and kills them. He was so cunning that he left no clues and evidence for his killing. CBI officer along with his team members keeps on trying to solve the case of serial killing as it was increasing day today.

Paatal lok web series was released on 15th May 2020 on prime video. Paatal lok was directed by Sudip Sharma starring Jaideep Ahlawat, Neeraj Kabi, Ishwak Singh. The series is full of crime, drama, and thriller. The story of the paatal lok is about the out for the count cop handles a truly mind-blowing instance when four suspects are grabbed in the death endeavor of an ideal time writer.

The case ends up being an insidious labyrinth where nothing is what it resembles. The quest for it drives him to the dull underworld – the ‘Paatal Lok’, and to stunning revelations in the past of the four suspects. Some plots of the Paatal lok have been influenced by the book that is written by Tarun J. Tejpal named “The story of My Assassins”. The book contains real-life incidents that have been conducted by journalist Tejpal. Tejpal’s life was changed when 5 different hitmen were caught by the police officers for planning the conspiracy of tejpal’s murder.

Aarya is the 9-episode web series that was released on 19th June 2020 on Disney+ Hotstar. The web series is full of crime and drama and is created by Ram Madhvani and Sandeep Modi. The web series is produced along with the Endemol shine group starring Sushmita Sen, Vikas kumar, Ankur Bhatia, Sikander kher.

Aarya web series reminds the audience about how well the classic phrase of incorporates works,” even in the best families” From an external perspective, Aarya Sareen, an especially fit, actually shocking mother of three, appears to have everything: a caring spouse, luxury life, no issues other than to pick the outfit of the day from a genuinely tasteful closet. Scratch a bit, however, and out spill a few jars of wriggly worms.

Bandish Bandits is the 10- episode web series that was released on 4th August 2020 on prime video. Bandish Bandits web series have lots of Drama and Romance and is directed by Amritpal Singh Bindra, Anand Tiwari starring Ritwik Bhowmik, Shreya Chaudhary, Naseeruddin Shah. Bandish Bandits story is a very refreshing wave of youthful love and music. In the series, a city girl and a town fellow who is headed to be the awesome the class met up to work together because of a personal goal. With time their regard for one another just as the music genre develops, which takes the state of affection. In any case, things go amiss on the individual front. Can they accomplish their objectives and make a rebound together?