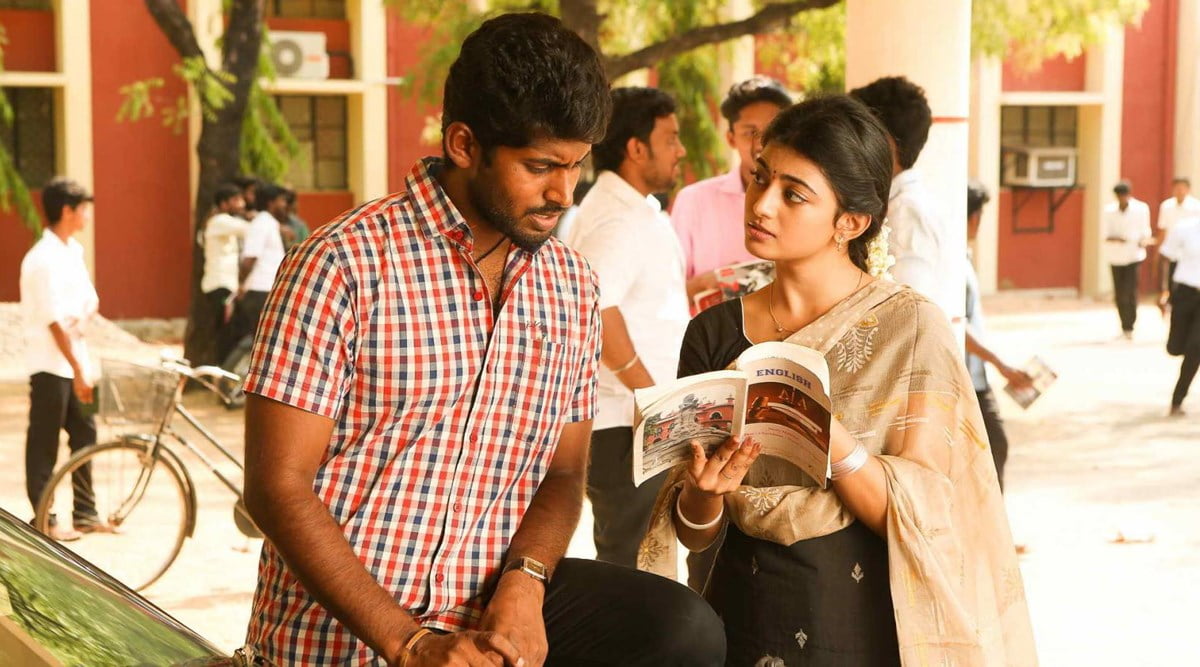 Believe it or not, South Indian movies have gone far ahead of Bollywood movies nowadays. South Indian Cinema is giving a tough competition to Bollywood. It is complete in every way, be it acting, entertainment, comedy, script, or action. All the five South Indian Cinema industries – Tamil, Telugu, Malayalam, and Kannada collectively refer to as a unity. Tulu, Malayalam, Tamil, Kannada, Telugu – All South Indian movies provide raw and action-packed stories. OTT platforms make it very easy for us to watch these movies in just some clicks. There is no need to go anywhere. Just sit at home and scroll them. Here are the best South Indian films you can binge-watch on Amazon Prime.

Pariyerum Perumal is an Indian Tamil language drama film released in 2018. Mari Selvaraj directed it, and Pa. Ranjith produced it. The movie follows a youngster named Pariyan(Kathir) who has a dream to become a lawyer. He joins the Law college and faces many troubles and embarrassment there because he is not good at English. Jothi Mahalakshmi(Anandhi) becomes his friend, and she helps him in learning everything. Mahalakshmi belongs to an upper cast, and Pariyan belongs to a lower cast. So, the relationship between both of them creates a huge issue in Mahalakhshmi’s family. They harass Pariyan. The film is picturized excellently and makes us aware of the discrimination based on caste. Pariyerum Perumal is one of the best South Indian movies to watch on Amazon Prime.

Anbe Sivam is a 2003 Indian Tamil-language film. Kamal Haasan wrote it, Sundar C directed it and the producers of the film are K.Muralitharan, V.Swaminathan, and G.Venugopal. The story of the movie is about an unpredictable journey of two men, Anbarasu and Nallasivam. They dont know each other and have opposite characters. But how their story merges, the whole story revolves around it. They meet each other at Bhubaneswar airport while waiting for their flight to Chennai. Then the flight cancels, and they spend few hours together. Due to some circumstances, they are bound together by fate.

Kumbalangi Nights is an Indian Malayalam-language film released in 2019. Madhu C Narayanan directed it. Fahadh Faasil and Nazriya Nazim produced the film. Shaji, Bobby, and their half brothers live a simple life in a small old house in Kumbalangi. Bobby works in a fishing firm where he falls in love with Baby Mol, a tourist guide. Baby Mol’s elder sister is recently married to Shammy. Her family gets a marriage proposal from Bobby’s brother. Shammy rejects the proposal and points out that all the brothers are not well-reputed, and Bobby is also unemployed. Boney, Franky, and Saji are Bobby’s siblings who decide to help Bobby. All siblings have a hate-love relationship, but some circumstances lead them to neglect their bitterness and support each other.

Mahanati is a 2018 Indian Telugu language film based on the life of an Indian actress Savitri. Nag Ashwin wrote and directed it. C. Ashwini Dutt, Priyanka Dutt, and Swapna Dutt produced it. Vijay Anthony and Madhuravani is a journalist, and Vijay Anthony is a photographer. They are assigned a work by a newspaper editor to write a cover story on Savitri, who has gone into a coma. Madhuravani collects various shreds of evidence, details about Savitri from multiple sources and starts scripting the story. She interviews Gemini Ganesan, Savitri’s husband also and interrogates him:

Baaram is a 2018 Indian Tamil-language film. Priya Krishnaswamy wrote and directed it. The movie is based on 65-year-old security guard Karuppasamy who lives with his nephews and sister. Her sister and nephews love him alot while his son Senthil doesn’t have any warmth towards him. One day while returning home, Karuppasamy meets with an accident on the way. Due to severe damage, the doctor advice him to undergo surgery. But Senthil does not have enough money for his father’s surgery. So, he takes Karuppasamy home and doesn’t take good care of him, which leads to his death. The film forces us to think about how older people around us get treated.

The cast of Baaram is R. Raju as Karuppasamy, Sugumar Shanmugam as Veera, SuPa Muthukumar as Senthil, Jayalakshmi as Menmozhi, Stella Gobi as Stella, Bremnath V as Mani.