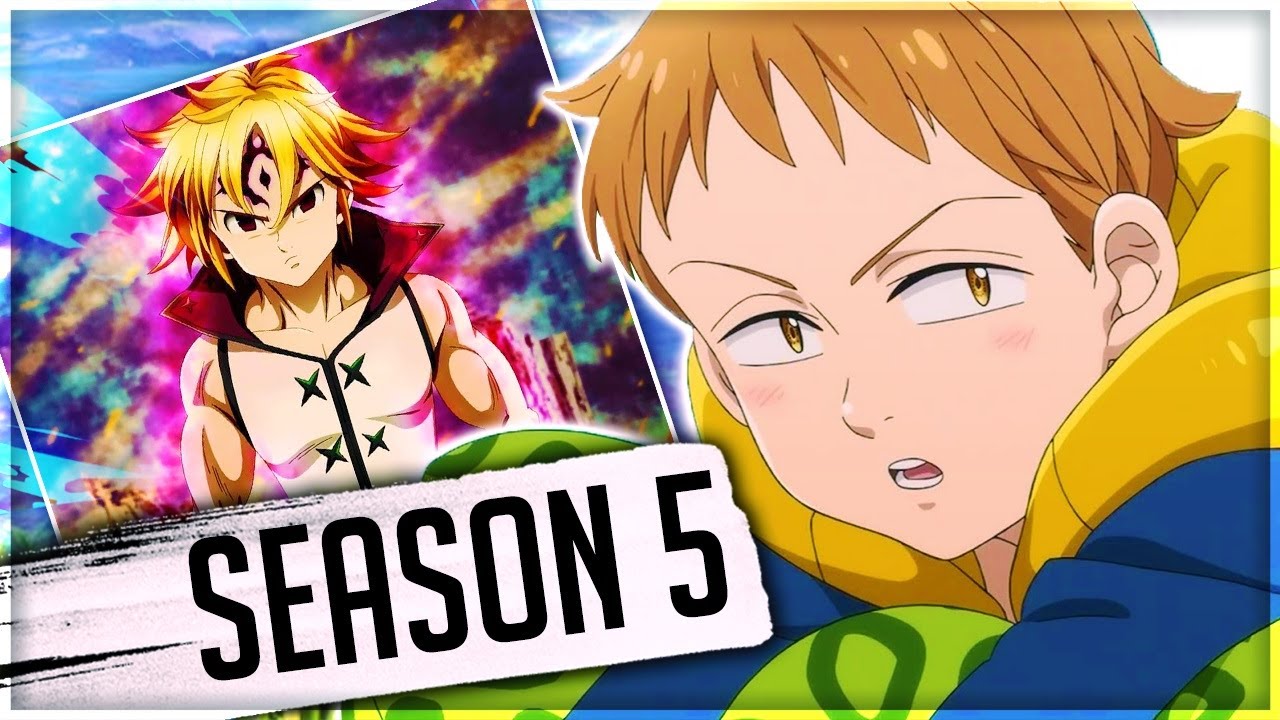 Almost we all have spent our childhood watching Japanese and Korean cartoons. From Doraemon to Shinchan or Anime series. We all love watching them. These all are a perfect blend of entertainment and fun. Just the same, The Seven Deadly Sins is a fiction-based story. Well, it is amongst the most popular anime on Netflix. Moreover, This series is, in actuality, a Japanese Manga series. Aa per the schedule, originally it was releasing on 5th October 2014. The first season comprised of 24 episodes in total.
Recently, the official website of the show announces that season 5 will be returning on January 6th, 2021 in Japan.

Delayed due to COVID-19

Almost every field got badly affected by a coronavirus and so did this series too. Originally, the fifth installment of the hit Anime was scheduled to be released in October 2020 in Japan. But, like many other projects, this Anime series also got delayed because of the coronavirus pandemic.
Now finally as per the official announcement this is likely to be premiered on Netflix in summer 2021.

About The Seven Deadly Sins

The Seven Deadly sins is an anime and a manga series. This is well known for its comedy, action, and romance. This is written by author Nakaba Suzuki. Well talking about its theme, it is set in a world which resembles the European medieval ages. This anime series is all about a group of powerful Knights that had an identity as the Seven Deadly Sins. In the main setting of Britannia and its Kingdom, there are powerful magic, talking animals, and nonhumans.

TAKE A LOOK: The Uncanny Counter Episode 8 – Korean Drama out on Netflix

The story is about Elizabeth who is the third prince of the kingdom of Liones. 10 years after the holy war, princess Elizabeth is searching for the now missing Seven Deadly Sins as she wants the help them to retake her kingdom. The Kingdom had a rule that was under the control of the corrupt Holy Knights. There’s a rumor about the Seven Deadly Sins that there still wandering in the lands of Britannia.

They were exiled, disbanded, and were given a tag of traitors for planning to overthrow the kingdom of Liones. later on she finds and team up with all the Sins, consequent battles take place. The team consists of Sins, Elizabeth, goddesses, the Holy Knights, demon clan, and fairies; and the battle for justice and peace.

The Main Plot of the Series

Princess Elizabeth is on a journey in search of Seven Deadly Sins. Hungry and exhausted she stumbles into the Boar Hat tavern. She meets its owner, Melodias, and also the talking pig Hawk. Surprisingly, Meliodas turned to how to be the leader of the Deadly Sins and agreed upon her to help in searching for the other six.

They encounter the first sin, the Serpent’s sin of envy along with the Holy Knight Gilthunder in the thick forest of White Dreams. During the fight between Gilthunder and the two sins, they were misled by him that all the other sins are dead. But after believing the opposite they continued their journey in search of the rest. Diane is overwhelmed after Meliodas’s return and decides to follow them to release Ban, Fox’s sin of greed. He is kept in Baste Prison.

In a skirmish between Meliodas and Holy Knights’ Weird Fangs, he was left very unconscious. In Dalmary town, his treatment of his injuries was done. Diane, on the other hand, is left without Meliodas’ help and takes on to the Weird Fangs to get to the prison. She leaves Elizabeth to take care of Meliodas. He suddenly wakes up when the Weird Fangs’ Golgius grabs his sword. Coming to the Ban, we saw how he breaks out of his prison cell and reunites with Meliodas and the group.

The Search of the Sins continues

Later on all the characters reach a town of ruins which is near the Necropolis. There is a rumor that they might find king the Grizzly’s Sin of Sloth, here. The team enters Necropolis, thanks to Ban’s memory of Elaine, who’s King’s late sister. A Holy Knight, Guilla, follows them secretly. King appears before them and starts fighting with Ban as he believed that Ban is responsible for killing Elaine and destroying their home, the Fairy Forest.

This prompts Ban to remember his past where he met Elaine while he was trying to gain immortality from the Fountain of Youth, only to fall in love with her instead. In the kingdom of Necropolis, there still lies Elaine’s spirit. Finally, she revealed herself in front of the king so that she could ask him to protect Ban.

Participation in the Fighting Festival

The king now reconciled with Ban, the group continues their search to find the sacred treasure of Diane, which is the powerful weapon that was wielded by the seven sins. But they all end up participating in a fighting festival where they encounter Jericho and Guila along with Helbram.
After the pickup of Gowther, the Goat’s Sin of Lust, the sins discover the truth behind the new generation of Holy Knights.

Merlin, the Boar’s Sin of Gluttony, she reveals herself as the mentor of Arthur, the young king of the Kingdom of Camelot. Later on, Hendrickson, the Great Holy Knight reveals that he has obtained many demonic powers with the help of studying the gray and red demons of the land. Dreyfus, another Great Holy Knight who switched sides after and is responsible for aiding the sins against Hendrickson, only to be killed.

AT A GLIMPSE: Bandish Bandits Season 2 release date, everything you must know

To protect Elizabeth and Meliodas Hawk sacrifices himself. Later, manages to survive. Lastly, with the help of Gowther and the Holy Knights, Meliodas manages to prevail against Hendrickson.
Meanwhile, Hendrickson disappears from the battle and then king Bartra expresses his great thanks to all the sins for saving the kingdom and protecting princess Elizabeth. The label of traitors was now no more valid on the status of Sins. The series continues with many such wars to bring peace to the kingdom of Liones.

Prisoners of the Sky

The Seven Deadly Sins: Prisoners of the Sky is a movie in which the events are after the revival of the Commandments. Although it does not contribute any major or important points to the plot of The Seven Deadly Sins. Moreover, this movie gives an introduction to the Six Black Knights of the Demon Clan. Malleolus and the group half to battle against this Clan. Goddess Race and Celestials are living in a sky castle. In fact, one can say that it mostly served as a side story to expand the universe regarding the Ten Commandments and the Demon Clan. This standalone movie had all the Deadly Sins in it.

This popular anime series had 24 in total in the first season. For the English release, Netflix gave license to it. Eventually, on November 1, 2015, all the episodes were released. On 15th May 2017, part one of the first season was releasing on Blu Ray. While the other didn’t made us to wait long as the team gave a gift to the fans by releasing it on 23 June the same year.
The episodes whereas follows:

The second season i.e The Seven Deadly Sins: Signs of Holy War premiered on 13th January 2018 and later on was officially released on Netflix on 15th October 2018. It also included 24 episodes in total.

The Seven Deadly Sins’ third season had many adventures moreover This was released globally in the year 2020 on 6th August and premiered on Netflix. Just as the first and the second seasons this also had 24 episodes. The broadcasting of the show took place on BS TV Tokyo and TV Tokyo.

The fourth season of The Seven Deadly Sins is scheduled to be broadcasted in Japan later on from January 8, 2020. However, the finale was aired on March 25th, 2020. Finally, it was released on 6th August 2020.

There’s a lot to expect from this season as we are still in the search of the plot of the final season of the series. Moreover, In August 2020, a big announcement was made and. This was regarding the new season that it will have a title as The Seven Deadly Sins: The Judgement of Anger. Also, fans got to know the first-ever look of this season.

People’s reviews on the series

Many people agree upon the fact that the characters are very memorable and the music is also amazing. According to them, this anime is fantastic and the animation is decent. Almost every season receives love and immense support from the fans. Some people tag it as the greatest show ever. Many give it 10 upon 10 stars while some provide it 7 or 8.
However, this series is successful in earning the recognition as Netflix’s Best Anime when it was premiering for the first time in 2014.